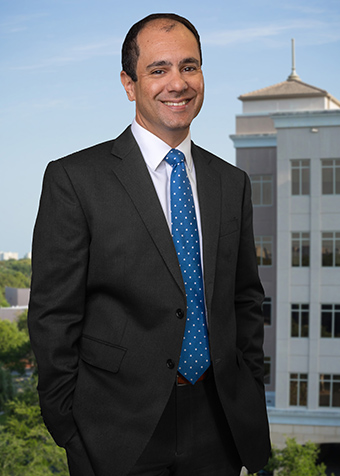 Luis E. Rivera is a shareholder in GrayRobinson’s Fort Myers office and focuses his practice on business litigation, bankruptcy, creditor’s rights and insolvency counseling. He is one of only 13 attorneys in Florida who is Board Certified in Business Bankruptcy Law and Consumer Bankruptcy by the American Board of Certification. Since 2010, Luis has also served as a U.S. Bankruptcy Trustee for the Middle District of Florida. As a panel trustee, Luis is one of the two court-appointed fiduciaries who administer Chapter 7 bankruptcy cases filed in Southwest Florida.

His bankruptcy experience includes representation of lenders, landlords, individuals and financial institutions in both consumer (Chapter 7 & 13) and Chapter 11 reorganization cases, as well as involuntary and discharge proceedings. As a trustee, he is also routinely involved in liquidation of business enterprises, including the recovery and sale of assets; the investigation, development and prosecution of litigation to recover funds for creditors; and the reconciliation and payment of claims held by creditors.

Active within the legal community, Luis serves as Chair of The Florida Bar’s Grievance Committee for the Twentieth Judicial Circuit. Luis has also served on the Bench-Bar Fund Committee of the United States District Court for the Middle District of Florida, and the District-Wide Steering and Local Rules Committees of the United States Bankruptcy Court for the Middle District of Florida. Luis is also a past-president of the Southwest Florida Bankruptcy Professional’s Association.

In 2017, Luis was named to the American Bankruptcy Institute’s (ABI) inaugural 40 under 40 class. This initiative was launched to identify top insolvency professionals in the country under the age of 40. Luis was one of four Florida honorees and the only insolvency professional to receive this honor from a small market. He was also recognized as Florida Trend’s Legal Elite for Bankruptcy and Workout in 2017 and 2020.