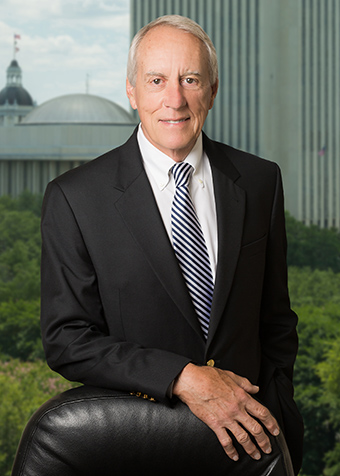 Mike is of counsel with GrayRobinson whose experience spans many practice areas, including commercial litigation, arbitration, mediation, governmental consulting, administrative law, petroleum, health care, and sales and use taxes. He has represented clients before state and federal trial and appellate courts, including the Florida Supreme Court. He is experienced in complex, multiparty disputes as a litigator and as a certified circuit court mediator. Mike has represented a variety of health care interests since beginning his practice – including hospitals, special hospital districts, hospital-based physicians, blood banks, clinical laboratories, pharmaceutical companies, surgeon societies and dental societies. He has been active in all aspects of health care legislation and regulation for more than 30 years. Mike has represented design professionals, owners and contractors in construction matters for his entire career. He is experienced in construction contracts, mechanics' liens, licensing, public procurement, and civil and administrative disputes. Mike has also represented petroleum marketers and distributors throughout his career in matters involving franchising, pollution cleanup, environmental compliance, fair marketing and state and local taxation. For years he has served as general counsel to statewide professional and trade associations, advising them regarding employment law, officer/director liability and state agency regulations and representing them before the Florida Legislature, governor and cabinet and state agencies. In May 1999, Mike was conferred honorary membership in the prestigious American Institute of Architects for his significant legal and governmental contributions to the profession of architecture. In 2003, he was honored for his decades of legal and governmental services to the petroleum industry by induction into the Florida Petroleum Marketers and Convenience Store Association's Hall of Fame. He also represents local, national and international corporations in matters involving Florida’s legislature and agencies.