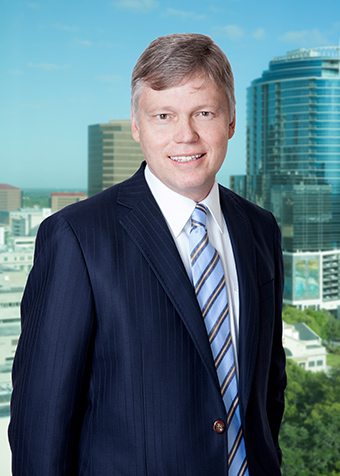 Todd is a litigation shareholder in GrayRobinson’s Orlando office. With more than three decades of trial and appellate court experience, Todd focuses his practice on both state and federal civil litigation, real estate and contract litigation, securities and corporate governance disputes, class action defense, and intellectual property litigation throughout Florida. With a mission focused entirely on client service,. Todd has a successful track record handling bench and jury trials in state and federal courts.

Board Certified by The Florida Bar in Business Litigation in 2005, and recertified by the Florida Bar every five years since, Todd is continually ranked by leading industry publications such as The Best Lawyers in America for Commercial Litigation and Litigation-Intellectual Property, and Florida Super Lawyers for Business Litigation. He is a Martindale-Hubbell AV rated attorney and a Fellow of the Litigation Counsel of America. Todd is a past Orlando Chapter Federal Bar Association president and his civic involvement includes recent tenure as chair of the board of directors for the Coalition for the Homeless of Central Florida, where he continues to serve in other leadership roles.

After graduating from the University of North Carolina School of Law in Chapel Hill in 1988, Todd practiced for 23 years at the Orlando law firm of Lowndes, Drosdick, Doster, Kantor and Reed, P.A. where he became a shareholder in 1995 and later led the firm’s complex litigation team. Todd then joined Akerman LLP’s litigation practice group as an equity partner, where he practiced for six years before proudly moving his sophisticated business litigation practice to GrayRobinson.

Corporation, Partnership and LLC Disputes and the Defense of Securities Cases: